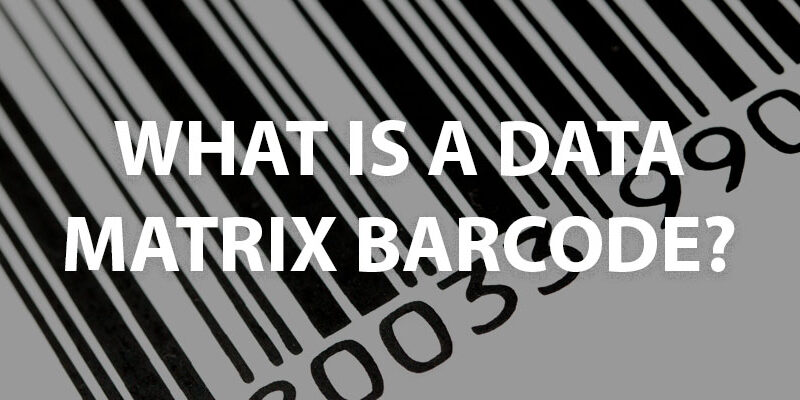 What is a Data Matrix Barcode?

What are the differences and similarities between matrix codes and barcodes?

Though both barcodes and data matrix codes are found on a wide variety of packages and component parts, there are differences between the two. They both are scanned with a scanning device that automatically recognizes the contents of the package or the part. Both types of codes are much faster than manually identifying products and components and result in far fewer errors.

Barcodes, such as an EAN or a UPC, are one-dimensional (1D) and linear. They are read from left to right. Data matrix codes are two-dimensional (2D) and can be read from any angle.

Data matrix and barcodes are easily distinguishable just by looking at them. A linear, 1D barcode consists of a series of vertical bars of different widths. A data matrix code is made up of cells arranged in a square or rectangular pattern. The most common barcodes are EAN and UPC. EAN consists of 13 numeric characters, and UPC has 12. They are essentially the same, except EANs have an additional country code. In contrast, a data matrix code can store up to 2,335 alphanumeric characters.

Data matrix codes have a higher density, so they can occupy less space than a barcode. This makes them much more suitable to use on small products and round surfaces. Another advantage of data matrix codes is that even if up to 30% of the surface is destroyed, they can still be read and decoded.

What are the differences and similarities between matrix codes and QR codes?

As mentioned, a data matrix code is a 2D code made up of black and white cells arranged in square or rectangular patterns and can store up to 2,335 alphanumeric characters. A quick response (QR) code is also a 2D code, which consists of black cells arranged in a square grid on a white background. It can store as many as 4,296 alphanumeric characters. Whereas the finder pattern on a data matrix code is an L-shaped bar along adjacent edges, the finder pattern on a QR code is made up of three square structures in its corners. This makes QR codes easily distinguishable from data matrix codes.

QR codes were first developed for the automotive industry to track vehicles and vehicle parts during the manufacturing process. They have since become popular as a way for mobile phone users to open website addresses and scan text, contact information, and more. You can find QR codes almost anywhere these days, including on billboards, products, magazines, signs, and even your television screen.

Both QR and data matrix codes are excellent at storing information. Both can encode large amounts of data in a small space that can be easily scanned, making them useful for a myriad of applications. QR codes are more widely used because nearly everyone has a scanner on their phone, which makes them excellent for marketing and consumer messaging.

How to scan a data matrix code

Data matrix codes can be scanned from any angle using a data matrix or omnidirectional camera scanner. Some smartphone cameras come equipped for scanning data matrix codes, but most require a third-party app to read them.

A major pro of a data matrix code is that it can still be read if up to 30% of the code is damaged. This is crucial for businesses where the ability to track every component is essential. Data matrix codes can encode letters, numerical data, and other ASCII characters, making them extremely versatile. You can read a data matrix code with an image-based barcode reader or a mobile device from any angle. They are also highly scalable, making them extremely useful for labeling small parts and packages.

Data matrix codes are especially useful to label small items because they can encode a lot of information in a very small space. Some data matrix labels are as small as 300 micrometers in length. But they are also scalable and can be as large as 3 feet by 3 feet. Essentially, data matrix codes are only limited by the ability to read them with the appropriate scanning device.

Data matrix codes are used extensively to label small electronic and industrial components, but they are also used widely in many different industries, including food and beverage, aerospace, pharmaceutical, defense, mail, and print media because tracking and traceability are critical in these industries. At Coast Label, we can use data matrix codes for your industry. If you’re looking for data matrix labels, Coast Label is here to help.